The study has been authored by Nachiket Mor, a visiting scientist, The Banyan Academy of Leadership in Mental Health, Tamil Nadu and Raghu Dharmaraju, president at AI & Robotics Technology Park (ARTPARK) at IISc and fellow, Lancet Citizen’s Commission on Reimagining India’s Health System.

Over three lakh adults still die from tuberculosis each year in India, while in China, a country with an equally significant tuberculosis problem, annual death rates have been reduced to below 40,000. Simultaneously, the burden of chronic diseases like cancer, hypertension, and diabetes is rapidly rising across the country.

India does poorly on all the three dimensions along which health systems’ performance is measured – health outcomes, financial protection, and responsiveness – both for the population as a whole and for the bottom quintile. About 6% of the population (7.5 crore people) return to poverty each year due to health expenditures, and almost twice as many (15 crore people) are forced to forego care. About 6.5 lakh children die within a year of birth — a number 6 to 10 times higher than what a reasonable health system should allow for. Over three lakh adults still die from tuberculosis each year in India, while in China, a country with an equally significant tuberculosis problem, annual death rates have been reduced to below 40,000. Simultaneously, the burden of chronic diseases like cancer, hypertension, and diabetes is rapidly rising across the country.

Does this poor performance and the moment in time that we are in right now, combined with some of our latent strengths, paradoxically, present us with an opportunity to leapfrog the health systems in other countries? We’re going to argue that it does indeed do that, just as the absence of copper-wiring allowed us to become global leaders in mobile telephony and the internet when those technologies came along.

The absence of legacy: Countries, like the United States, with mature health systems, are struggling to change them even though they can see the problems that they present because the sheer weight of legacy is holding them back. In contrast, India’s health system comes as close to being legacy-free as it is possible to be. The public sector currently provides only about 20% of the health care, the corporate sector less than 5%, and almost all the facilities operate with paper records and minimal use of information technology. It is reminiscent of a time in the early 1990s when there were very few large banks and no microfinance institutions or small finance banks, just thousands of money lenders and informal money transfer agents doing what they pleased. As a result, unfettered by the pulls and pushes of legacy, today, we have been able to build a modern, technologically-enabled payment and micro-lending system that is the envy of the world.

A highly favourable talent-to-value ratio: As the information technology industry discovered in the mid-1990s, India has a very favourable and sustainable human resource advantage relative to the rest of the world. For example, a well-trained nurse in India is paid an annual salary 30 times lower than a similarly trained one in the US. This advantage extends up to super-specialists and, in fact, only tilts further in India’s favour. In addition, we have a deep pool of talent that is driving the cutting edge of innovation across the globe that we can call upon.

Powerful pharmaceutical and medical technologies industries: Outside of the developed nations, India is the only developing country that makes the full range of essential medicines and vaccines at very low costs. On the medical technologies front, while there is, for now, continued dependence on imports and international giants, there is a host of smaller companies waiting in the wings to take off, given adequate demand for their products.

Deep capabilities in cutting edge technology: India has become a global powerhouse in the technology sector, and projects like UIDAI/Aadhaar for identification, UPI for money transfer, IRCTC for railway ticketing, and the string of satellites that ISRO has placed in orbit demonstrate the ability we have to execute very large and complex projects. This ability, at a time when technologies like machine learning and artificial intelligence are transforming entire eco-systems, if directed well, has the potential to completely alter the healthcare landscape in India.

Deep corporate and capital market capabilities: While the corporate sector remains tiny in the healthcare sector, this is no longer the case in most other sectors. This reduces the need for the government to intervene in those sectors and gives us the much-needed growth buoyancy.

We believe that these are some of the reasons that allow us to completely reimagine what a new 21st-century health system should look like. However, this reimagination requires the government and the private sector to fundamentally change some of the established ways in which they think about health systems.

Offer the best of public health by focussing on the comprehensive implementation of public health measures such as disease surveillance, immunisation, vector control, and the long-term prevention of the movement of diseases from animals. Implementing them successfully clearly needs a strong on-ground effort that can also benefit enormously from using modern technologies such as Artificial Intelligence, machine learning, molecular biology, and satellite-based landscape epidemiology.

Shift tax investments away from industrial sectors to social sectors by redirecting them away from agricultural, industrial, and infrastructural activities, where the markets can now function well. Instead, focus them almost entirely on social sectors such as healthcare and early childhood development, where markets cannot deliver value to people even if they have the purchasing power.

Drop minimum entry-capital requirements that protect incumbents from competition in the health insurance sector at least to the prudential levels required by the European Union, which is one sixth of India’s. The dropping of these barriers will facilitate the creation and widespread distribution of innovative integrated health insurance products and health care services that are more suited to the needs of low to middle-income communities. It will also improve the overall extent of health insurance penetration from the currently minuscule level of 7%.

Move towards comprehensive, integrated care. To enable this, the government needs to use its regulatory and financing powers to force the public and the private sectors to jump from their current exclusively paper-based approaches models to using the best of modern data management and decision support technologies. And from a fee-for-service to an integrated annual payment model. These shifts will get them to move away from an episode-by-episode approach and take accountability for long-term patient well-being.

Fully overcome the problem of human resource shortages by moving away from a health care model that exclusively focuses on MBBS and MD doctors and then severely restricts their supply to one which, enabled by financial tools such as Income Contingent Loans (ICLs), opens-up the supply of these doctors. In parallel, enabled by technology, focus on a much broader range of skills, pathways, and certifications, highly localised unrestricted entry, and just-in-time training, to create entirely new cadres of healthcare workers with the competency and legal ability to prescribe medicines and offer treatment.

With our current sets of capabilities and the opportunities presented by the environment, we in India stand at an inflexion point in our journey to build health systems that truly serve our peoples no matter how central or remote their residence or how high or low their current incomes may be. The government and the private sector need to step forward to benefit from these opportunities and build such health systems. Thailand took this step over 20 years ago by benefitting from its deep technical capabilities in health systems design and strong service culture in its public sector. During the same period, the war-torn nation of Rwanda built a health system with near-universal access to comprehensive primary care because of its conviction that this was more important than building hospitals. There is no reason why, if we start now, we should not be able to transform our health systems over the next decade, following our own unique pathways.

Wed Feb 2 , 2022
Among patients with diabetes, the teach-back method was associated with better interactions with health care providers, more engagement in shared decision-making and a greater likelihood of receiving lifestyle advice, data show. This, in turn, was associated with reductions in diabetes-related complications. Read More 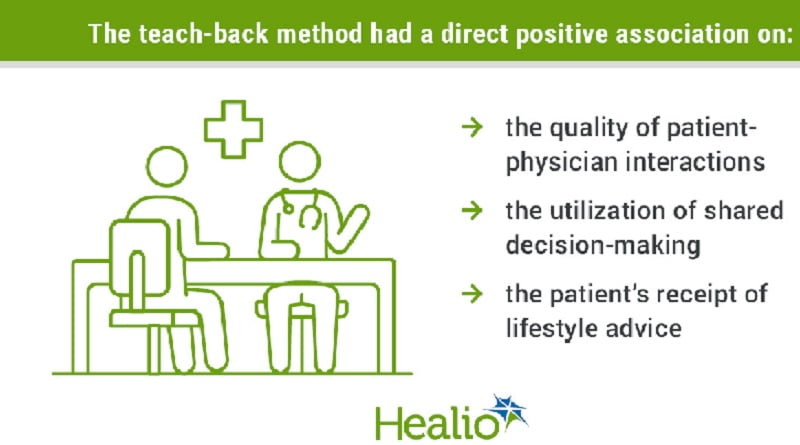