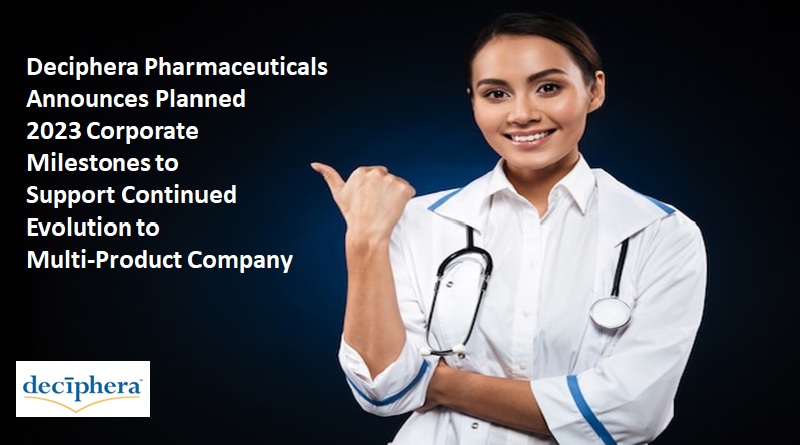 Deciphera revealed findings from an exploratory analysis of circulating tumour DNA (ctDNA) from the INTRIGUE Phase 3 clinical study of QINLOCK in patients with gastrointestinal stromal tumour (GIST) previously treated with imatinib. These findings showed QINLOCK to have a significant clinical benefit in second-line GIST patients with mutations in KIT exon 11 and 17/18 only. Additionally, the company declared intentions to start the pivotal Phase 3 clinical study INSIGHT comparing QINLOCK to sunitinib in this patient population in the second half of 2023.

“We are extremely proud of the significant progress made across our pipeline in 2022 and are in a strong position to build upon this momentum in 2023 with key commercial, clinical, and preclinical milestones on the horizon”, “We believe that Deciphera is on track to become a company with multiple approved products, and that QINLOCK and vimseltinib together have the potential to exceed one billion dollars in global revenue annually. At the same time, we continue to complement these commercial goals with research and development innovation powered by our proprietary switch-control discovery platform to drive new growth opportunities with potential first-in-class or best-in-class kinase inhibitors.”

Business developments and upcoming business benchmarks for 2023 include:

At a medical conference in January 2023, present further information from the INTRIGUE Phase 3 exploratory ctDNA analysis.

In the second half of 2023, start the pivotal Phase 3 clinical study INSIGHT comparing QINLOCK to sunitinib in second-line GIST patients with mutations in KIT exon 11 and 17/18.

2023 will see the continuation of QINLOCK’s geographic growth across Europe, with planned commercial launches occurring when pricing and reimbursement negotiations in significant European regions have been resolved.

In the first half of 2023, enrollment for the pivotal Phase 3 MOTION study of vimseltinib, an investigational, orally administered, potent, and highly selective switch-control kinase inhibitor of CSF1R for the potential treatment of tenosynovial giant cell tumour (TGCT), will be completed. In the fourth quarter of 2023, top-line study findings will be made public.

In the second half of 2023, provide updated findings from the vimseltinib Phase 1/2 investigation.

In the second half of 2023, start one or more expansion cohorts in the ongoing Phase 1/2 investigation of DCC-3116 in combination with trametinib, binimetinib, or sotorasib, which are MEK inhibitors, or the KRASG12C inhibitors trametinib or binimetinib.

In the second half of 2023, start a new dose-escalation combination study to examine DCC-3116 in combination with encorafenib and cetuximab in patients with colorectal cancer. Encorafenib will be provided free of charge by Pfizer as per the conditions of the clinical trial collaboration and supply agreement with Deciphera, Inc. Deciphera will be the trial’s sponsor.

In the first half of 2023, present preclinical information on fresh clinical combinations with DCC-3116.

In the second half of 2023, submit an investigational new drug (IND) application to the FDA for DCC-3084, a possible best-in-class pan-RAF inhibitor.

In the first half of 2023, provide in vitro and in vivo data indicating a preclinical profile as a strong and selective inhibitor of BRAF/CRAF kinases with optimised pharmacological qualities for development in both single-agent and combo prospects.

In the first half of 2023, Deciphera should propose a fresh development candidate from its exclusive database of innovative switch-control inhibitors.

According to early unaudited financial data, Deciphera anticipates total revenue for the fourth quarter of 2022 to be around $36 million and total revenue for the entire 2022 fiscal year to be around $134 million. The expected $33 million net product revenue for QINLOCK includes about $26 million in net product sales from the United States, approximately $7 million from other countries, as well as approximately $3 million in revenue through collaborations. International and total net product revenue for the fourth quarter includes a one-time reserve for QINLOCK product sales in Germany as a result of a change in German law that reduces the free pricing term from twelve months to six months retroactively as of November 2022.

As of December 31, 2022, cash, cash equivalents, and marketable securities were around $339 million. According to its current operating plans, Deciphera anticipates that its current cash, cash equivalents, and marketable securities, along with anticipated product, royalty, and supply revenues, minus any potential future milestone payments under its collaboration or licence agreements, will allow the Company to finance its operating and capital expenditures through the year 2025.

The company will declare its complete financial results in February 2023, however the preliminary selected financial information included in this release is preliminary, subject to change, and unaudited.

Wed Jan 4 , 2023
In this webinar, you will hear from Frank Hoogenraad, the Senior Product Manager for 3T at Philips who will share details about the Philips MR 7700, the latest innovation in their 3T portfolio. With XP gradients and artificial intelligence, the system is built to address the most pressing needs in […]