The World Health Organization has updated the COVID-19 vaccine’s emergency use list for adolescents and adults receiving the primary series of the Novavax Nuvaxovid vaccine.

The World Organization for Health (WHO) has updated the Emergency Use List (EUL) for the COVID-19 vaccine NuvaxovidTM (NVX-CoV2373) for active immunisation to prevent coronavirus disease 2019 (COVID-19) caused by severe acute respiratory syndrome coronavirus 2 (SARS-CoV-2) as a primary two-dose series in adolescents. This information was released by Novavax, Inc., a biotechnology company dedicated to developing and commercial

“The updated WHO Emergency Use List allows us to offer our protein-based vaccine as a primary series for adolescents and as a booster for adults worldwide”, “WHO member countries now have a vaccine option for these indications developed using an innovative approach to traditional technology that can also be stored in standard refrigeration, making it easy to transport.”

Based on data from the ongoing paediatric expansion of the Phase 3 PREVENT-19 trial of 2,232 adolescents 12 to 17 years of age at 75 locations in the United States, the revised EUL for Nuvaxovid as a primary series in adolescents 12 to 17 years of age evaluated the safety and efficacy of Nuvaxovid. When the Delta variant was the main SARS-CoV-2 strain circulating in the United States at the time, Nuvaxovid demonstrated 80% overall clinical efficacy in the paediatric expansion, meeting its primary efficacy endpoint.

The paediatric expansion’s preliminary safety data indicated that the vaccination is typically well tolerated. Serious and severe side effects were infrequent, evenly distributed between the vaccine and placebo groups, and not thought to be vaccine-related. After the first and second dosages, local and systemic reactogenicity was typically lower than or comparable to that in adults. The most often reported adverse responses were headache, myalgia, weariness, and malaise, along with soreness or pain at the injection site. Comparing younger adolescents (12 to 15 years) to older adolescents (15 to 18 years), there was no difference in reactogenicity. Through the paediatric expansion’s placebo-controlled phase, no fresh safety signs were noticed.

Data from the Phase 2 trial of Novavax done in Australia, from a different Phase 2 trial conducted in South Africa, and from the United Kingdom (UK) sponsored VOC -Try BOOST support the updated EUL for Nuvaxovid as a booster in people 18 years and older. A single booster dose of Nuvaxovid was given to healthy adult participants as part of the Phase 2 trials of Novavax, about six months following their initial two-dose Nuvaxovid vaccine series. The third dose resulted in heightened immune responses that were on par with or higher than those linked to protection in Phase 3 clinical studies. When used as a third booster dosage in the COV-BOOST experiment, Nuvaxovid significantly increased the antibody response.

Local and systemic responses in the Novavax-sponsored trials had a median duration of roughly two days following the increase. Grade 3 or higher events continued to occur seldom. All three of Nuvaxovid’s doses showed an increased incidence of reactogenicity events, which is frequently seen with increased immunogenicity, according to safety reports. After the booster dose, there were an equal number of medically managed adverse events (AEs), potentially immune-mediated medical conditions, and serious AEs in the vaccine and placebo groups.

The vaccine developed by Novavax has received approval in more than 10 markets, including the US, the EU, and the UK, for use in the 12–17 age group. Additionally, the vaccine has received booster licences from the US, the EU, Japan, Australia, New Zealand, and Switzerland. Several other nations have also received policy recommendations that permit the use of the vaccine as a heterologous or homologous booster. The vaccine from Novavax is currently undergoing active review in other markets for both indications, and trials to further examine its effectiveness and safety as a booster are ongoing.

GE Board of Directors Approves Separation of GE HealthCare

Thu Dec 1 , 2022
General Electric Company announced today that its Board of Directors has approved the previously announced spin-off of its healthcare business, GE Healthcare Holding LLC (“GE HealthCare”). Prior to such spin-off, GE HealthCare is expected to be converted into a corporation and renamed GE HealthCare Technologies Inc. The company is expected […] 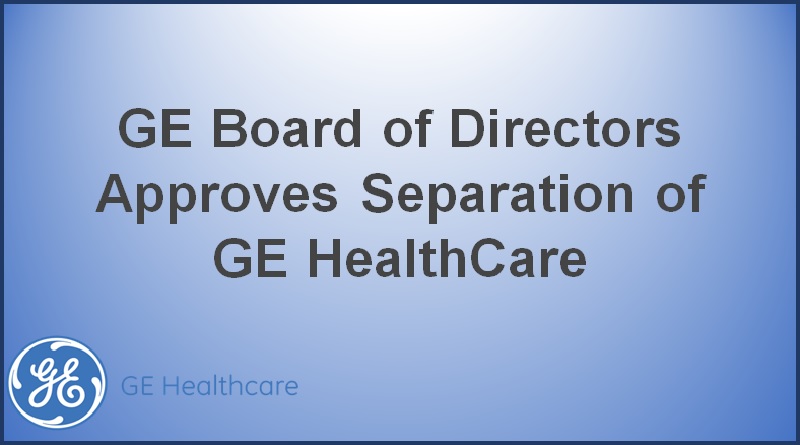 Data Request
We use cookies to ensure that we give you the best experience on our website. If you continue to use this site we will assume that you are happy with it.AcceptPrivacy policy